MIRACLES FOR MORTALS: Killer Magic for the Rest of Us
Volume Two
by Geoff Williams

BACHELOR'S THREAD - Raj Madhok's marvelous method of magically producing the ring for a Ring & String routine. It just appears out of NOWHERE!

THREADY OR NOT - My "improved" handling for the first phase of any Ring & String routine. Originally based on the Earl Nelson move (in "Variations"), this one addresses two major discrepancies in the original.

READY 2 LINK - A technique that makes the get ready for the Linking Rubberbands TOTALLY INVISIBLE. Based on Roger Klause's brilliant concept of "half-moves".

SHUFFLING STYLES FROM AROUND THE WORLD - A modular card routine where a card is located after a series of shuffling demonstrations. Includes the marvelous "Sybil" flourish cut (thanks to Chris Kenner) which is taught with a 5-card packet for easier learning.

IS IT HOT IN HERE OR IS IT JUST ME? - How to produce a seemingly-lit cigarette from anywhere on your person AT ANY TIME in your act.

DEVASTATION - This might just be the BEST impromptu card trick ON THE PLANET! Tom Daugherty's totally impossible card location that'll devastate your audience (hence the name). Note: there's NOT ONE SLEIGHT in the entire trick! Works with a borrowed deck. Worth the price of this DVD MANY TIMES over.

BEAR HANDS - A great packet trick for kids (or adults) where a bear jumps from a card onto a spectator's hand.

HAIRBALLS - A multi-phase, 2-ball sponge ball routine loaded with magic and designed to keep the spectator from opening their hand early (and spoiling the surprise finish).

THE HAT TRICK - The close-up version of pulling a rabbit out of a hat, suitable even for restaurant workers.

EVERYTHING'S A RADIO - A real reputation maker! Make a radio station broadcast come out of anything: a ketchup bottle, a crayon, a drawing... ANYTHING!

IF THINE EYE OFFENDS THEE - Your eyeball falls out. You wash it off in your mouth. You glue it back in. What could be more natural? 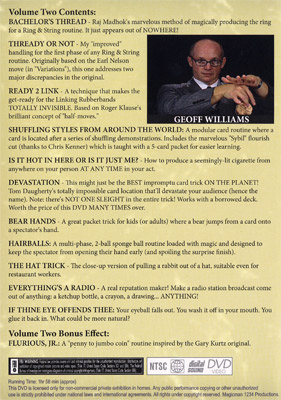 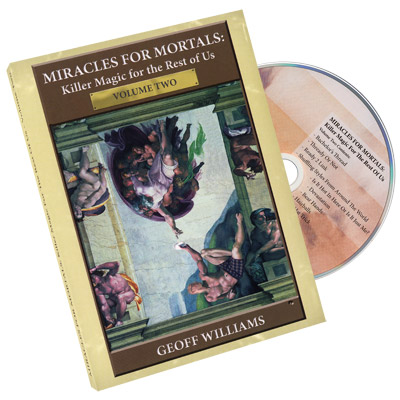