Michael Skinner wass one of the best all-around close-up magicians in the world. The Master Teach-In series, which was originally released on three videotapes, teaches some of the classics of close-up of magic that every magician should know. Skinner performs each routine for a live audience and then takes you step-by step through the construction of the effects, explaining the sleights, subtleties and the psychology involved in perfecting them. Here is your opportunity to learn a few of the classics of magic from one of the best in the business.

Volume One: The Linking Rings:
The Linking Rings are one of the most popular routines ever invented. They are performed by beginners through professionals and are a regular part of most stand-up and children窶冱 shows. Michael Skinner has devised a three-ring routine for use in restaurants and close-up situations. It features many nice sequences where they link, unlink, form patterns and are examinable at the conclusion. Techniques taught within the routine include The Vernon Sweep, Spinning The Rings, The Swing Unlink, The Crash Link, Sawa窶冱 Pull-Through, The Skinner Link, The Drop Link, Koran窶冱 Thumb Link & Unlink, Linking Ring Finesse, and The Switch Finale.

Volume Two: The Color-Changing Knives:
The Color-Changing Knives is a classic of close-up magic that is performed by most professionals. It is visual, magical and uses ordinary looking objects. Michael Skinner窶冱 pet routine with the knives is quick and full of surprises. In addition to the full routine you will also learn The Paddle Move, The Swivel Change, and The Touch Change.

Volume Three: The Ring On The Stick:
The Ring On The Stick is a popular routine used by close-up magicians who perform in restaurants, parties and bars. The basic effect is of a borrowed ring vanishing and appearing on a stick being held by a spectator. The Ring On The Stick has become a staple of Michael Skinner窶冱 shows. You will learn two different sequences. The first involves impossible conditions using a handkerchief and a rubber band while the second version is done barehanded. Very few routines carry the lasting impact of The Ring On The Stick. 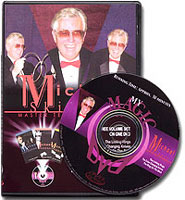