From the fertile mind of Scotland's premiere conjuror comes a visually stunning, easy-to-perform gem of commercial card magic. The intriguing story and the unique props provide a strong emotional hook designed to draw audiences in. And the handling is so simple that you can concentrate on what's important - being entertaining. Three tarot cards are introduced, two Fool cards, and a Wheel of Fortune card. The tale tells the effect: "I'd like to tell you the story of a legendary con artist who invented the world's oldest card trick. Today it is called Three Card Monte, but it began as 'The Search for Fortune.' It was invented long ago and used three cards from the tarot. Two Fools...and the Wheel Of Fortune. "The idea was simple: If you find a fool... you lose. Find the fortune and you win! One day an old woman watched the con man play. He mixed the cards and laid them in a row. She placed a small bet on the first card ... and lost (a fool card)! So she bet a little more on the next card... and lost again (another fool card)! Finally, she bet all she had on the last card... and lost (yet another fool card)! That's when she realized she was being cheated. "Invoking her Gypsy heritage, she uttered a strange and powerful curse under her breath and turned away from the cheat. From that moment his fate was sealed. He was forever doomed to lose. Whenever he tried to work his con, no matter how he moved or manipulated the cards, if they chose the first card... they would win. If they chose the next card... they would win again. And if they chose the last card... they would take it all. Soon, all he owned were the clothes on his back and these three cards. Remembering the old gypsy, he spent months trying to find her. When he finally did, he begged her to give him his life back. She agreed to play one last time - with his life as the prize.

"Now she mixed the cards and removed one of them... and even showed him the other two before placing them aside (a fool and a fortune card). With but a single choice, he blurted without hesitation, 'It's a fool!'

"With a smile she replied, 'No, you're the fool...' and he dropped DEAD on the spot (a surprise death card!). This is how I learned a valuable lesson - never cheat - because when you make your living like that... the odds are always against you!"

In addition to the main routine, Paul also teaches how to make all three cards turn into death cards for a killer climax! 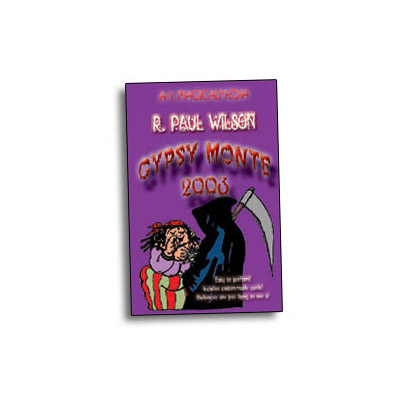