Star of Las Vegas & Network Television!
Magic & Comedy from a Real Professional! Featuring The Watch Steal!
Comedy Magician Extraordinaire, Jeff Hobson has done it all! From headlining in Las Vegas to feature performances on network television (NBC窶冱 World窶冱 Greatest Magic) and cable networks such as Showtime. A sought-after performer for Fortune 500 corporate events, trade shows, and motivational speaking, Jeff Hobson is known worldwide as one of the funniest, and busiest, comedy and magic performers in the world. Here is your chance to see him strut his stuff!
On this very special DVD, you窶冤l see Jeff Hobson perform his zany brand of comedy and magic for a live audience, highlighted by the incredible 窶徇ultiple watch steal!?EThen Jeff teaches you his pet magical secrets and routines, including the watch steal! PERFORMANCE: Fire Eating; Silk in Apple; Vanishing Wand; Card to Mouth; Cigarette Eating; The Rope Routine; Balloon Bag; The Egg Bag; and The Watch Routine. Following his hilarious act, Jeff teaches:
SILK TO APPLE/VANISHING WAND - A signed silk vanishes in your bare hand and magically reappears inside an apple that has been held by a spectator! Jeff teaches all of the moves, subtleties and professional tips that make this routine a real showpiece! Easy to do! Also learn the Vanishing Wand!
THE BALLOON BAG - A great effect kids or adults! Tons of comedy and great magic. A balloon is removed from an otherwise empty paper bag and is twisted into a balloon doggie. A "unfortunate" accident involving gravity and your shoe ensues, with the doggie getting comically squished and popped. The broken balloon is put into the bag, the bag is blown up and popped, and out comes the restored doggie!
CIGARETTE STUFF - Numerous comedy bits of business with a cigarette. Jeff teaches the infamous, 窶徂ow to eat a lit cigarette!?ENOTE: This is highly dangerous! Do this at your own risk!
THE WATCH STEAL - The highlight of the tape! Jeff窶冱 pet method for stealing a watch right off a spectator窶冱 wrist! He窶冱 so good at it he steals watches from numerous people during his act. Plus, he teaches what he considers to be the best and most practical steal ever created! 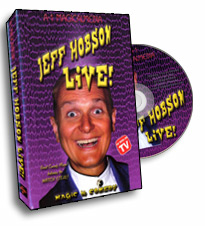