Roger Klause is one of magic's most respected performers and instructors. He has long been referred to as an "underground magician" due to the secretiveness of his methods. This DVD features highlights from his best selling book, "Roger Klause In Concert," giving you an opportunity to experience one of the deep thinkers of close-up magic who tips the way he approaches his magic in addition to the methods of accomplishing his routines. 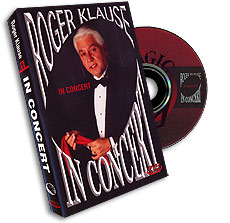