The spectator signs a completely free choice of playing card, the magician says he will locate the card by feel alone. The card vanishes from the deck only to appear in a wallet that has been in full view at all times.

The magician makes a prediction by showing a folded card within a small wallet. He asks the spectator to name any card. The card is removed from the wallet to show that it is in fact the named card.

A $1 bill is borrowed from and signed by the spectator. The magician takes it and folds it into 1/8ths. The bill vanishes and appears folded inside a wallet, which has been in full view at all times.

The magician borrows a quarter; small stickers are placed on both sides. The spectator is asked to initial one side, and the magician initials the other. The coin is taken by the magician and immediately vanished. The coin is finally found in a wallet, which has been in full view.

The magician writes a prediction on a small piece of paper that is folded and placed in a wallet. The spectator is asked any question, from their PIN number to their date of birth, anything at all. The wallet is opened and the magician removes the paper. It is revealed that the magician has correctly predicted the answer to the question.


Comes complete with gimmicked wallet, backup wallet, prop for creating card gimmick, and detailed instructions on how to perform all 5 tricks!
" 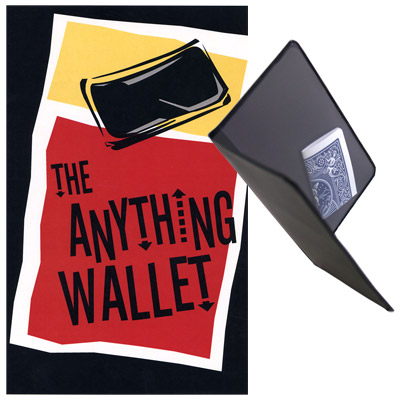