Who the hell is Scott Alexander? Why haven窶冲 I heard of him? The answer is simple窶ｦhe窶冱 been working. Scott has been a top pro for many years and one of the busiest professionals in the world. His credits include Denny & Lee, Malone窶冱 Bar in Boca, cruise ships all over the world, Caesar Magical Empire, and now he窶冱 starring in his own show at Fitzgerald窶冱 in Las Vegas.

His style is simple窶ｦcomedy that goes right to the center of the audience窶冱 brain. His choice of material is always professional, practical and easy to perform. His methods are easy so that he can spend his energy on entertaining but the effects are all blockbusters. The included routines come right from his working repertoire. They are not pipe dreams. Real workers that are easy to do. Soon everyone will know the name Scott Alexander!

Bullet Catch
This is a death defying, close-up version of the classic 窶廝ullet Catch.?EIt窶冱 an amazing demonstration that uses just a straw and its wrapper. Can be used either in walk-a-round or formal show situations. It窶冱 foolproof and easy to do.

Shattered
Without a doubt this is the ultimate solution for the dangerous 窶彝ussian roulette?Eplot. Scott窶冱 routine is more powerful than any other because the audience makes all of the decisions. His method is totally safe. Destined to become an instant classic.

Archery
Scott窶冱 handling of the Benzais classic where the performer flicks a face up card into the deck. It lands directly on top of the selection. Scott has created a totally new method that cannot miss.

Water Monte
Sure you can manipulate cards or the shells, but water? This routine for formal performance always has the audience several steps behind you.
It窶冱 a showstopper that like all of Scott窶冱 work is honed to perfection.

Coffee Break
This one will make your audiences feel like they窶况e had way too much caffeine! It窶冱 a very sneaky version of coins to glass that has a great 窶徭ell?Eand a final load direct from Starbuck窶冱. It窶冱 diabolical and but easy to do.

Metrosexual
This is a really fun to perform routine for adults designed around one of the newest buzzwords 窶廴etrosexual.?EThis is a very funny, cutting edge routine that will leave the informed howling with laughter. 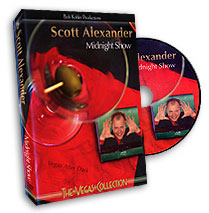