Volume 4 showcases Lennart's work on false shuffles. Extremely deceptive and original, these shuffles are an important part of Lennart's card magic. If the audience believes the deck is shuffled, you can do miracles. This volume also marks the release of the Real Green Shuffle, Lennart's pet favorite false shuffle, one he has kept closely guarded until now! This volume will raise your card work to the highest level! 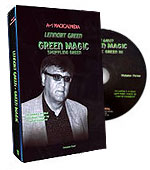