This box will allow you to perform numerous mysteries, as a mentalist, a bizarrist, or a magician. The box may be used to help you reveal secret information, be a repository for an amazing revelation, or the destination for a magically transported playing card or slip of paper. The genesis of this tool was its exotic appearance, followed by the discovery that its exact dimensions were perfect for use with business cards, or blank business card stock. The box itself is totally unprepared and ungimmicked, and so, the other part of the secret of the Tibetan Wishing Box are some very natural and easily learned handlings Allen developed to allow the performer to secretly load or steal a card from the box.

The real secret of this effect, however, is the presentational premise. This is a wishing box to contain wishes and possibly make them come true. The interesting, some may say, exotic, design of the box itself should heighten interest and lend credibility to this basic premise, or any other such that you wish to create, The late great performer, Dr. Jaks, understood perhaps better than anyone, the impact that unusual and/or rich looking items could have in weaving a spell with your audience. While in mentalism it has often been said that for every prop added, the value of the act goes down, in intimate performance, creating a strong premise and evocative performance can often be aided by the use of such a "prop" if carefully chosen and if it makes sense in the context of the performance. With the Tibetan Wishing Box, there are many avenues for interesting presentations. Here are the three effects provided with the effect in the manuscript. 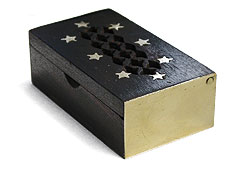