Make the value of a spectator窶冱 playing card slowly appear on your arm in blood red . . . anywhere, anytime! Reveal a thought-of number from across the distance separated by phone lines. Engage two people in a fun routine where the performer predicts a

page number and a word 窶徭een?Eby a volunteer on an invisible Palm Top computer. Become a human lie detector in a thrilling and

comical adventure. This DVD continues from Part 1 with close-up, stand-up and stage mentalism and mental magic with additional

direction and sleight-of-hand into one smooth effect. Also, learn the 窶彿nside?Esecrets of what Banachek considers one of the most

Bullet Catch illusion now used by Penn & Teller, the difference between mentalism and mental magic plus comical anecdotes about

blindfold drives. You will also see a television clip of Banachek窶冱 窶廝uried Alive?Eescape hosted by William Shatner and TV footage of

one of Banachek窶冱 early Blindfold Drives. 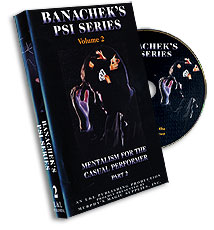