The spectator freely selects a card from the deck, memorizes it, and returns the card back into the pack. The magician concentrates on the spectator's card, and removes ONE card from the deck, and places it face down on the table. It really would be a masterpiece if THAT card would be the freely selected card from the spectator... Next, the tabled card is turned face-up only to find out that the card is NOT matching the spectators selection. Undaunted, the magician continues by placing the card face up in between the face down deck, with NO moves at all, the magician ribbon spreads the deck on the table, and the only face-up card in the spread has now CHANGED INTO THE SPECTATOR'S SELECTION!! But there's more: The magician says, "In fact, there is just one card in this deck that is your card." The selection is taken out from the spread and turned face-down slowly to reveal that now on the BACK of their selection is largely written with a black marker, "YOUR CARD!" An unreal effect with a "kicker" ending! A real miracle beyond belief! Key points to keep in mind: 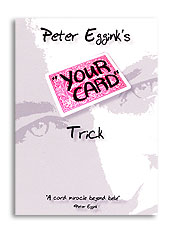