Yigal Mesika is an incredibly talented young magician from Israel. He has created many powerful new effects with the loop. He also found it necessary to improve the quality of the loop and so, for the past seven years,Yigal searched until he found a better way to manufacture the loop. The product you see here can be stretched up to 400% of it's original size and is perfectly suited, in strength and invisibility, for the routines found in this book.Until now there has been very little information available on the loop and that kept the subject relatively unknown and rarely used. The aim of this book is to guide you through the techniques of working with the loop, as well as to give you some applicable routines for stage, close-up and mentalism. Most of the effects were created by Yigal Mesika. The rest of the effects, as indicated, were compiled from the repertories of working magicians, Yigal's friends.

繝ｻ Animated Fork - A fork is placed on a table and mysteriously moves.
繝ｻ Phenomenon Fork - A fork is placed on a hard surface and begins to spin rapidly as the magician waves his hand above it. It stops and spins in the other direction. As soon as it stops it can be picked up for examination by the audience.
繝ｻ Falling - An object is placed on the table in front of the performer. Passing his hands around it, he makes it fall.
繝ｻ The Floating Card - The magician, holding a deck of cards, takes one card with his right fingers and causes it to remain suspended from his thumb. He slowly removes his hand away and the card remains floating in mid-air.
繝ｻ Jumping Fork From Glass - The magician performs a little concerto with a fork on the rim of a wineglass. The fork is then placed into the glass. The magician conducts the fork, waving his hands over the glass. The fork begins to slowly climb out of the glass and suddenly jumps out, dramatically falling down to the table.
繝ｻ Mystery Glasses - A pair of sunglasses is placed on a table. Mysteriously they stand up on their own and, in some cases, the frame-arms fold shut.
繝ｻ Self Revealing Card -A card is freely selected and returned to the deck. The deck is squared and placed on any surface. The magician waves his hands some distance above the cards and the deck mysteriously separates. One card pops out of the deck. It is shown to be the selected card, and all may be handed out to the audience for immediate examination.
繝ｻ Matchical Magnetism - A match held by a spectator visibly jumps to join another match in the magicians hand.
繝ｻ A Touching Trick - The magician causes someone to feel he has been touched without any apparent contact. While the eyes of the audience are on him, and while his own eyes are closed, a spectator feels that his hand has been touched. The audience can plainly see that the magician did not touch the spectator.
繝ｻ The Floating Ring - The magician borrows a ring and displays it on his finger. The ring is suspended from his finger. The finger is moved away and the ring remains floating in the air totally unsupported. The magician plucks it from the air and hands it immediately back to it's owner! 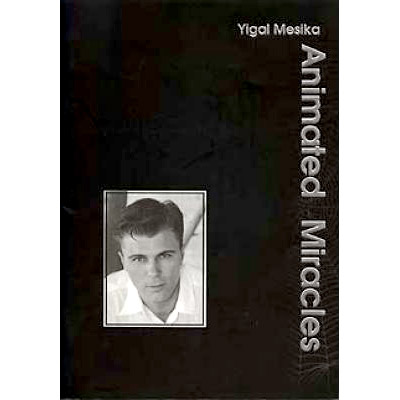