TRICK Once Upon a Time Guy Holling

Once Upon a Time is the brand new effect from Guy Hollingworth, containing three charming routines, none of which require any difficult sleight of hand. This is how the effect appears to the audience:

The magician removes what looks like a small, old, leather-bound book from its slip case. The book is opened, and the magician explains that this is a magic book that tells fairy tales by magic. As the pages are turned, pictures are seen on the pages, but the words on all the pages are the same. That's because you don't have to read the words, as the tales tell themselves by magic. In fact, the pages come out of the book, because even if the pages are all mixed up, the magic will still work and the tales will be told. Within the pages, stories such as "The Three Bears" are discovered. As the stories are told, the characters appear and disappear, bowls of porridge are eaten and chairs are broken at just the right moments in the story. At the end of the story, (in which, of course they all live happily ever after), the pages are put back into the book cover, and you are all ready to tell the story again, to someone else; or indeed to tell the story of Cinderella... ...or Jack and the Beanstalk - both of these stories can also be found within the pages of the book and told straight away, without any need to re-set, or rearrange the
pages.

Can you tell us what the effect of 窶楼nce Upon a Time?Eis?
The performer shows the audience what looks like a small old book, which he explains tells magical stories. As the stories are told and the "pages" are turned, the illustrations seem to come to life, so that the characters appear and disappear, pumpkins transform into carriages, magic beans grow visibly into huge beanstalks, geese lay golden eggs and so on.

How did the idea come about?
I became a godfather a little while ago, and wanted to be able to perform magic for my young goddaughter. However, I didn't want to do "children's magic" with big wooden props and corny patter, and for some reason she didn't enjoy my 6-phase gambling routine. So I thought I would try to
come up with some routines that people of all ages would enjoy, but that would still suit my performing style. I thought of the stories that I grew up with, and tried to capture the charm and, quite literally, the magic, of traditional fairy tales.

What audiences is it suitable for?
Obviously the original idea was to have effects that I could perform for quite young children, but I have found that in fact it is probably even more popular with adults. Certainly when I perform it for children, their parents really appreciate it (and I hope are badly fooled by it), but I also
perform it for groups of adults. In fact, my contemporaries at law school have told me it is their favourite routine that I perform.

What sort of performers is it suitable for?
This is certainly not just an effect for children's perfomers, although of course I hope that they will be able to use it, too. The method and effect are based on close-up principles, and I always carry it with me when I am working at a close-up function. As I said, I often perform it for adults anyway, but if I happen to come across young children when I am working, I have in my pocket an item not much bigger than a pack of cards with which I can perform up to 30 minutes of material for children. I also hope that hobbyists will enjoy it, for the same reason that I originally invented it: to show to family members at Christmas or other gettogethers. 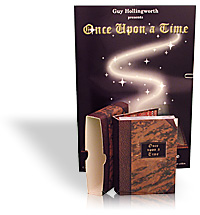