MIRACLE FLYING CARDS?See Richard do his classic routine in a new updated fashion in front of a large audience. You will see why this has been called one of the best stand-up card effects ever created!
SPIRIT WRITING ON CARD?This is a totally new routine! A number of blank and ungimmicked index cards are displayed. One is chosen and a design is called out. When a lighter is run across the card, the chosen design is burned into the card! Richard also shows how to control the flame of a lighter!
MULTIPLE KEY BENDING?This is Richard窶冱 personal routine for bending a number of borrowed keys in the hands of a spectator! See how Richard uses suggestion to first cause her hands to lock together and how she feels the keys bending! The best method for bending keys on stage!
CLIP LINE DELUXE?Once you see this effect, you will really understand what窶冱 so special about Richard窶冱 thinking! The classic Clip Line effect is performed in such a way as to look totally impossible even if you know the original secret! This is spectacular!

AMAZING MEMORY DEMONSTRATION?This may be the most important routine in the series! Not only will you learn one of the most stunning demonstrations you can perform, but the advice Richard gives could change the very way you live!
STENO ESP?This is Richard窶冱 method of doing the classic Mental Epic-type effect with nothing but a steno pad! Not only is this easy and fun, but you will see how Richard窶冱 thinking reverses some of the workings!

OUT OF HAND?This routine has long been unavailable. It won widespread acceptance when it first appeared on Richard窶冱 Challenge Magic. With this, you will have one of the most entertaining Six-Card Repeat-type effects ever invented!
INDUSTRIAL STRENGTH LINK?The performer repeatedly links and unlinks a large industrial spring from a coat hanger with ease while the spectator fails every time! The routine grows in impossibility until the spring actually unlinks in the spectator窶冱 hand!
COIN SNATCH?Richard Osterlind窶冱 own way of doing the old classic with a clever new addition which will convince your audience that you have the fastest hands in the world!
ORIGINAL INSIDE OUT?This is the first time this effect has appeared anywhere! A single folded card repeatedly turns itself inside out with just a wave of the hand! The effect grows as a paper clip is placed onto it. What窶冱 more, the card is given out at the end! 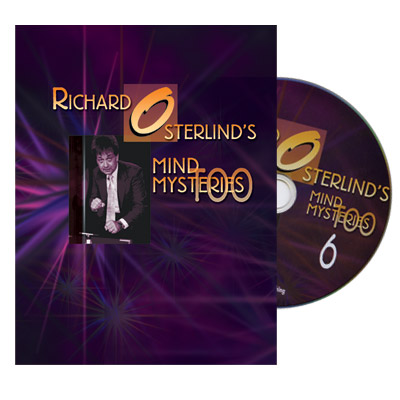