Joshua tips the work on his twelve-minute act, including his Ambitious Card and borrowed ring routines. He窶冱 performed this award-winning act all over the world, and now you窶冤l have a peek at the thinking behind it. Also included are performance clips from his acclaimed one-man show, a detailed study of his Discreet Displacement sleight, and a special screening of The Heckler, Joshua窶冱 magic-themed short film.

Losing Diamonds: Visually flick the pips off the wrong card and change it into a signed selection.

The Remote Control: A signed card is controlled by a remote held by a spectator. The routine climaxes with the discovery of the same signed card inside the remote窶冱 battery compartment.

The Aspirin: The opener and closer to Joshua窶冱 act?produce an aspirin bottle and later reveal a signed selection inside窶ｦwithout ever touching the bottle.

The Discreet Displacement: This easy-to-do sleight can be used as a control, force, or switch. You窶冤l learn several effects possible, including窶ｦ
Discreet Displacement Collectors: An in-the-hands version of this Roy Walton classic that takes place in less than a minute.

Ringin?EAlarm: A borrowed finger ring (and a ring finger?no joke) is discovered inside an alarm clock窶ｦjust in the nick of time!

Plus: The Jay Change, D.D. Thought-Of Card, and lots more.

Extra Feature: 窶弋he Heckler,?Ea short, fictional film written, starring, and co-directed by Joshua Jay. This is what happens when you mess with a magician. 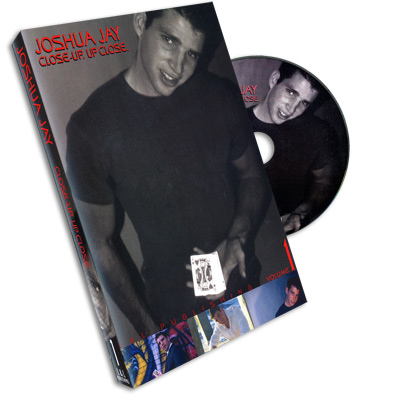