The material on this volume ranges from close-up to stand-up, from easy to difficult, and from cards to coins to ropes to tape measures to bills. But from start to finish, it窶冱 all audience-tested and approved magic. Also included are performance clips from Joshua窶冱 one-man show, a detailed discussion of practical memorized deck magic (that won窶冲 disturb your stack), and a making-of featurette.

Shrunken Revelation: Joshua has performed this trick on national television in four different countries and it won first place in the Marvin窶冱 Magic video competition at FISM 2000. Four Kings appear on four packets and then visually shrink to miniature cards.

Inflated Transposition: A dollar bill transposition with a new kicker?impromptu, easy-to-do, and perfect for walk-around professionals.

Heightened Senses: Predict any spectator窶冱 height with an 窶弭?Eon a tape measure. The method is as ingenious as the effect!

The Lampshade (performance only): Straight from his one-man show, this is Joshua窶冱 acclaimed chop cup routine to music using a lampshade and a bulb.

Pulling My String: The perfect opener to any rope routine. Stretch a tiny rope over seven feet窶ｦvisually.

Dear Journal: This trick won the IBM creativity award in 1998. A 窶徊ournal?Edeck is shown, each card bearing a different journal entry. Joshua divines not only a selected 窶徊ournal?Ecard, but even what entry is written on it!

Plus: Princess in my Wallet, Invisible Coin Purse, Jumbo Homing Card, Prediction Piece, Combined Interests, and a detailed discussion on memorized deck magic?from the point of view of a worker. You窶冤l learn the work Joshua puts in the deck, an extremely deceptive in-the-hands false shuffle, and several routines that don窶冲 disturb the stack.

Extra Feature: A behind-the-scenes documentary detailing what happened behind the cameras at every stage of Close-Up. Up Close. 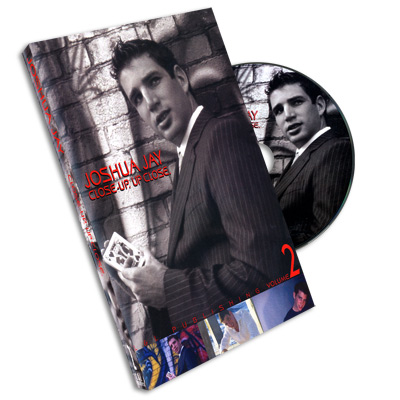