Before I Forget by Mark Elsdon - DVD

"Before I Forget
by Mark Elsdon

On this DVD...
Mark explains the method and psychology behind his opener, 'Balance' which surely has to be one of the most incredible close-up suspensions ever released. No fake deck, no magnets, yet a deck of cards impossibly defies gravity. Twice!

'No Moves' is a delightfully clean ambitious card routine (wait, hang on!) which climaxes with the selection eerily creeping out of the deck whilst out of the performer's hands! Again, easy to do and entirely self-contained.

'Chaos' is Mark's final handling of his previously marketed 'Chaos and Order' trick. It is that rarest of creatures - a self-working triumph effect. As is Elsdon's way, it is of course so much more than that. How many other card tricks offer entropy throughout the universe as an alternative ending?

The opening to a more formal show or stand-up performance, 'Memorisation' looks exactly like the real thing: the performer remembers the order of a shuffled and cut deck. He proves his claim twice and then ups the ante for the finale by claiming to memorise a participant's voice patterns. Packs small, plays massive.

'Celebrities' is a very commercial version of the 'Fred' trick which offers the ultimate synthesis of presentation and method and has the happy side-effect of being the ideal way to hand out your business card.

'Swindl-esque' offers an unusual visit to everyone's secret passion - that's right, binary mathematics! Using number cards for what looks like the most mathematical card trick ever, things turn odd (as usual) as Elsdon seems to become more pre-occupied with the color of a new hat which the spectator may or may not buy of course, amongst all the laughter the chosen number is revealed.

'Pre-prefiguration' is Mark's work on a Jennings effect. It is so clean and direct that one of Larry's friends declared it to be the best trick that he saw during the whole of his lecture tour throughout the UK a few years ago. A borrowed, shuffled deck and a series of escalating, unbelievable co-incidences, climaxing with the revelation of an impossible prediction.

Mark also shares the timing and blocking for his handling of card-in-mouth and his presentation for the one rubber band trick that works one-on-one or for an audience of 500.

Finally, in 'My Grandfather's Book' Mark engrosses the spectators in some personal history that includes several very unusual coincidences involving an old book and some commemorative playing cards. We don't want to say too much more about this routine, since we know its charm will work best if you don't know what's coming. 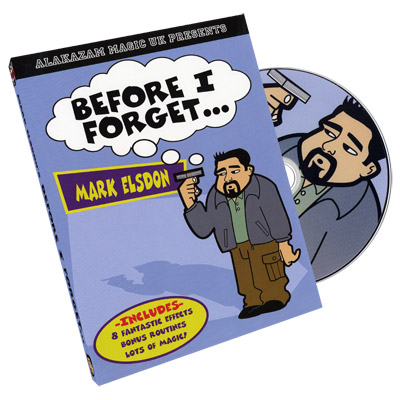