By adding another spectator and a few more moves, Richard Turner elevates the Signed Card Routine to new heights. Imagine an effect where two spectator's autographed cards, one from a blue deck and one from a red deck disappear, only to have both cards appear and reappear over and over again. The amazement of the audience escalates with each appearance of a signed card; from the performer's hat, under a mat, from a spectator's hat, a wallet, torn and restored, and from a sealed deck of cards. Titillating as it may already seem the grand finale explodes when the sealed deck is opened to expose the spectator's signed cards -- and it is the same card!!

Richard Turner's startling Double-Signed Card Routine is for the true sleight of hand artist. It can be incorporated into your existing show or utilized as part of a standup act or a close-up routine.

In addition to the double signed card routine, Turner reveals his long held secret -- Turner's Key Card. With Turner's Key Card, you will be taught how to locate a selected card, by touch only, after a spectator has shuffled it into the deck.

Additional Moves Taught by Richard on this DVD include: 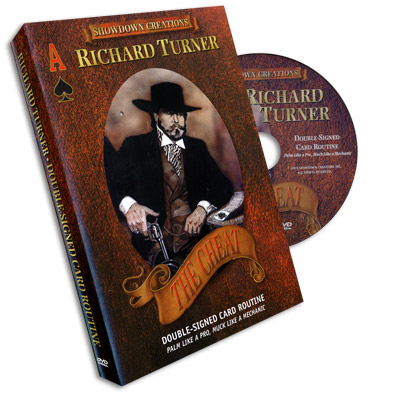