Volume 5 contains a potpourri of Lennart's innovative card work, including items with a gambling theme. You will also be treated to an entire chapter on original and deceptive false cuts, something for which Lennart is extremely well-revered. Follow a false shuffle with a strong false cut and your card magic will be all that much stronger. This volume is a must for any lover of card magic! 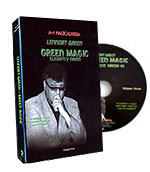