This trick is actually two mentalist effects in one! The set includes, two classic effects revisited and improved...Flight Plan, and Clues.

This is a mental mystery that is entertaining, uses lots of audience participation and should appeal to those who seek the unusual in their mentalism.

"I love the idea in Flight Plan, the simplicity and cleanness of not needing to ask a single question to arrive at your reading is so diabolical and hands off. Also your conversion information makes it extremely adaptable to nearly any situation. Good work"

With clues, each of three spectators selects a card making him or her one of the three main characters. Then each spectator pockets one of the five exhibits (murder weapons). Then, you playing the role of the Mental Detective, determine who the victim is and how he was killed. The victim's pocketed weapon is considered to be the murder weapon. Then you find the murderer and expose him and the weapon that he is carrying .

All the props necessary for theses effects are included. 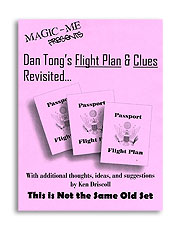