BIG COIN LITTLE PURSE ?EThis is the coin routine that earned Garrett Thomas a reputation among his peers. The routine begins with Garrett窶冱 fabulous handling of the neo-classic Hanging Coins (complete with a shocking ending!) and continues with his own Coin Purse routine. This is a visually stunning illusion where coins shrink, grow and pass into and out of a purse that is obviously too small for them to fit in. It all looks like trick photography . . . but it isn窶冲!

BLANK DECK ?EGarrett窶冱 no-gimmick version of the classic Nudist Deck. The cards are handed out at the end of the effect yet the spectators will swear that they were all blank just seconds earlier.

14 CENTS ?EA coin effect, yet it packs the punch of a sponge ball routine because it all happens in the spectator窶冱 hands. This is the strongest coin effect that Garrett does for laypeople . . . and you can learn all of the details here for the first time.

3 BALL ?EAn amazing prediction followed by an amazing production of a solid billiard ball. This simple yet powerful effect is guaranteed to elicit screams from even the most jaded audience.

APPLES TO ORANGES ?EVisual magic at its best as an orange changes into an apple! Garrett also shares a bizarre transposition of the apple and orange that窶冱 perfect for close-up or parlor work.

HOUDINI CARD TRICK ?EGarrett窶冱 version of the Ambitious Card, the effect that was said to once fool Houdini. It窶冱 a strange and powerful version of a card magic classic, complete with a surprise kicker ending.

BONUS: Performances only of Garrett Thomas?ERUBIK窶儡 CUBE and THE RING THING. 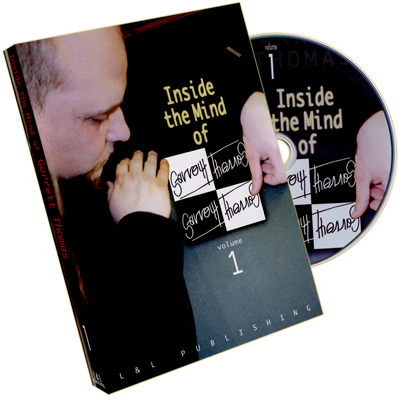