CHINESE SURPRISE ?EGarrett has taken Fred Kaps?Eclassic coin routine and added a surprise ending that will hit any audience hard. After several visual transpositions of a silver and copper coin, the audience will swear that more than two coins are in use. This is confirmed as the performer窶冱 hands are opened and four Chinese coins . . . and nothing else . . . are shown!

COLOR MONTE ?EGarrett窶冱 take on the Emerson and West classic using regular cards, a great presentation, and a very clean and easy handling. This is an effect you窶冤l carry with you and perform everywhere.

THOUGHT ?EDesign duplication the Garrett Thomas way! Garrett shares all of the touches on how to make a spectator swear that they actually see you reading their mind!

ANNIVERSARY WALTZ ?EGarrett窶冱 version of the trick made famous by Doc Eason. Garrett has analyzed the dynamics of performing this routine for a couple and has structured his version of this now-classic routine to maximize these dynamics. And at the end? The spectators are left with a souvenir . . . and an experience . . . that they窶冤l cherish forever! 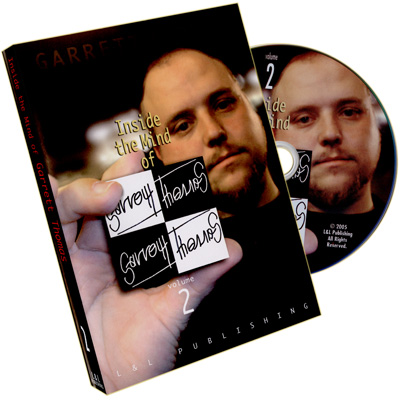