Daryl's New Millennium World Tour was the most extensive magic lecture tour ever to have been undertaken. Over two years Daryl spanned the globe from Las Vegas to London, from Sydney to Stockholm, sharing his special brand of magic at dozens of conventions and literally hundreds of lectures and workshops. These notes contain: 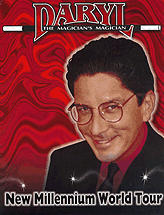