The Magical Attraction Between a Bill and a Card!

The performer asks for a bill. The bill is folded into a little packet and set aside. He then shows a deck of cards. The cards are shown face and back completely normal. The bill is then placed over the top card. Now, the performer says that the bill will mysteriously adhere to the back of the deck. A snap of the fingers, and to prove his theory, the index finger goes over the bill and moves it back and forth. " Hm, I think this hasn't adhered properly yet. But I can tell the magic is working. Slowly but surely!" After these words, the performer shows that he can slide the top cards off the deck, but then a third one, and the bill stays in position. "Let me try to make it adhere a little bit more" A magic Gesture, and the performer now turns the deck with the backs towards the floor (or table) and the bill, of course, remains in position. "Now enough with the playing! Let me finish this." The performer makes a final magic gesture, and lifts the bill. Mysteriously, the bill is attached on the back of the top card, and not only that, it is literally stapled! The spectators can see the staple on the other side of the card. The card and bill can be given as a memorable souvenir to your audience! 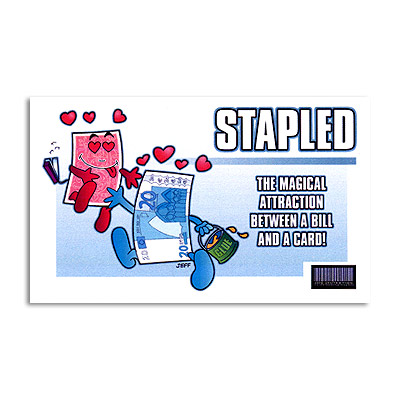