The performer begins..."As you are undoubtedly aware, we are ruled by an incredible synthesis of "choice and chance." Our ability to control certain pathways in our destiny are inextricably linked to forces truly beyond our meager human abilities to comprehend. One of those forces, perhaps one of the most powerful of all, lay far beyond our grasp...our reach. I am of course referring to the vastness of outer space; the cosmos, the influence of the planetary bodies themselves. I have a set of "planetary glyphs," tokens inscribed with various planetary etchings. There is Mercury, Saturn, Jupiter, Mars, Venus, The Moon, The sun, and Neptune. Today we shall see which planetary body you are under the influence of. I have in this small pouch a symbol of what I believe represents that very planet." The small pouch is then placed on the table in full view.

The performer continues, " Please take theses glyphs in your hands. Warm them with your life force. Shake them up, throwing the planets into a state of cosmic disarray! Now cast them to the table and observe: some glyphs are face up, while others are face down. Those face-down glyphs no longer have influence on your life. Let us remove the face-down glyphs which might cast negative influences. Now take the remaining glyphs and once again warm them...and toss." The process is repeated until only one glyph remains face-up.

The performer continues, "You will notice that the last remaining glyph presents an image of the Moon, the symbol of both the Greek Goddess Diana, as well as Hecate...the celestial and the infernal. It is a symbol of the cyclical nature of life, of new and old, death and rebirth; lost and found opportunities. You are strongly influenced by The Moon. If you doubt this, please remove the small "stone" from my pouch as proof." The spectator than removes a small moon shaped stone from the pouch. It matches the symbol on the glyph precisely!! 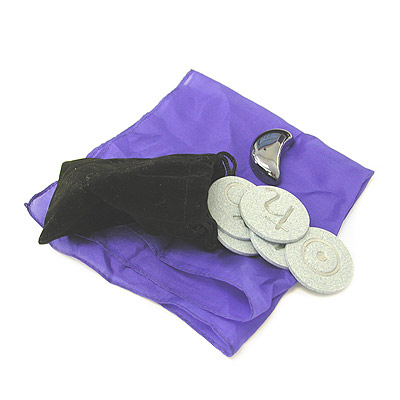