Almost every magician of any standing has demonstrated his ability to receive spirit messages. These astral communications nearly always appear silently and in secret. Not Anymore!

Now, the audience can actually HEAR the chalk write the complete message, and they can SEE the writing slowly come into focus.

Two pieces of black slate board are freely shown blank on both sides. Each side is wiped clean with a wet cloth. The slates are set on edge and leaned against a glass. A single piece of chalk is placed between the two boards When the mage extends his finger toward the slates and makes the slightest contact, THE CHALK BEGINS TO WRITE! The audience hears each letter being formed between the slates. They hear the looping of the letters, the crossing of "T"s and the dotting of "I"s. The mage doesn't move at all during the process; not even his finger! The sound of the writing comes from the slates and the actual chalk between them. The outside slate is removed and written in chalk on the second slate is a lengthy message.

There's more! The mage cleans the first slate board again, showing both sides shiny black and free of any writing. He leans the single board against another glass. Slowly and silently another message appears before the eyes of the audience! It looks like a ghostly special effect from a movie. Without exaggeration, men have wept witnessing these demonstrations in actual seances.

In a special living and dead test, you can allow a spectator to write the names of several people on one slate, wash them clean, and the only dead name will reappear on the slate five times larger than originally written!

You can cause any messages to appear and the slates can be used over and over. This is a hand-made apparatus that requires over 200 man-hours to produce.

You receive a pair of slate boards, chalk and illustrated instructions with several effects. Get your set today! 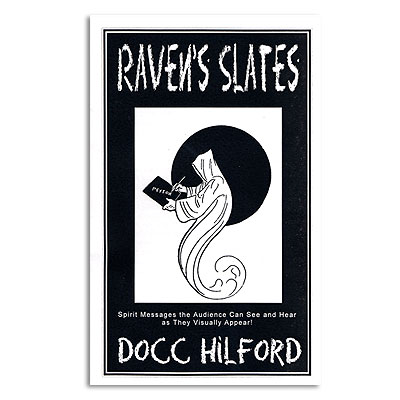