The card sword is a remarkable piece of magic, but it's never been as good as it could be. Now, it's a miracle! The Assassin Card Sword allows you to have any card freely selected and signed. Yet it still appears impaled on the end of a sword!

Effect: A borrowed deck of cards is shuffled and given to a spectator for a free choice of one card. The card is signed by the spectator in pen. You take the deck and the chosen card is lost in it. A large samurai sword is displayed and the deck is carefully set on the side of the sword's blade near the tip. Holding the sword with both hands, the deck is flipped into the air at that moment, you thrust the tip in to the airborne cards and stab a single card. The stabbed card is the spectator's card!!

The sword is offered to the spectator who removes his card from it. The card is actually sliced and on the end of the blade.

The assassin also allows for an impromptu version too. At dinner a card is selected and signed. The shuffled deck is placed on the side of a steak knife. The deck and knife are thrown to the ceiling. Cards shower down around the spectators leaving the signed card pinned to the ceiling by the knife!

Because the assassin is a special gimmick that can be used with any sword or knife, its performance possibilities are endless. The card and sword can be examined after the demonstration because the gimmick removes itself during the performance.

The card sword used to look like a clever magic trick. But now, your audience will credit you with great skill. It's incredibly believable!

You get complete illustrated instructions, the precision made assassin gimmick, and a beautiful samurai sword that is a replica of Bill's sword from the movie "Kill Bill volume 2." It has a massive steel blade and high quality sheath. This sword alone is worth hundreds of dollars.

Warning this effect is extremely dangerous and should not be performed or purchased by minors!!!! 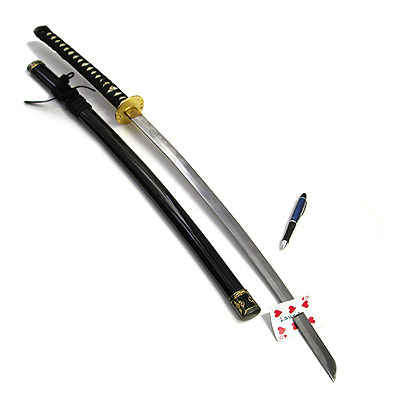