A Breathtaking Transposition of a Signed Card and a Signed Bill...

You display a deck of cards and allow a spectator the choice any card they like (no force). The spectator then signs the card and it's returned to the pack and lost. The deck is placed on the table. A bill is then borrowed as well which the spectator also signs their name on.

The bill is displayed on both sides and you slowly start to fold it into eighths. With the folded bill at your fingertips, you slowly wave it over the deck of cards and, as you do so, the bill visibly canges into a folded playing card! When the card is opened up, there is the spectator's signature!

Next, the spectator cuts the deck himself and finds a folded bill right where they've cut. The spectator himself unfolds the bill to again find their signature!

"Excellent! Just excellent!!!! Very clever and I can only imagine the impact it must have on an audience. Completely flabbergasting to them, an effect like that would have to be. Great job." -Reed McClintock 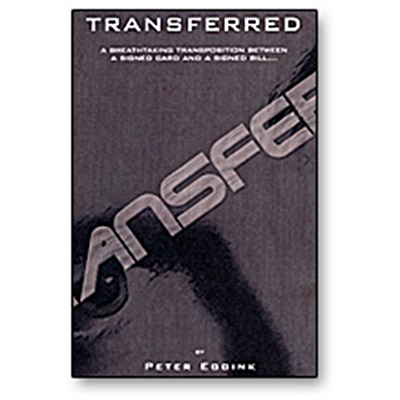