Whether in his native country or during his many engagements at Caesar's Magical Empire in Las Vegas or at the Magic Castle in Los Angeles, Fenik has long been perplexing some of magic's top names with his Mexican Revolution routine.
The effect is straightforward and eye-poppingly visual: four jacks turn face down one at a time, then turn back face up, and finally have their backs change from blue to red. Its highly ingenious method reduces sleights to an absolute minimum, but it's so much fun to watch you'll want to stay in front of the mirror doing it again and again!
With the U.S. Playing Card Co. having done a brilliant job of producing the necessary cards, The Mexican Revolution was first released by Gordon Bean and Larry Horowitz's company MagicLab at the Magic Castle swap meet in the spring of 2002, and instantly proved to be a big hit. Fenik then came up with a brilliant streamlining of his original handing that, in turn, led Gordon to come up with Jaywalk, which turned the effect of the original inside out. This time, after turning face up then face down, the cards change from jokers to jacks!
Considering that Jaywalk was the quintessential dealer's ad boasting three distinct phases of visual magic, no sleights required, only four cards used, fronts and backs of all cards in view, no glue, no wax, no double cards-the decision was made to put The Mexican Revolution on hold after its one day of release and wait for the necessary new cards to be printed.
So now, for the same price, you get both The Mexican Revolution and Jaywalk plus a whole new world of experimentation. After this revolution, twisting effects will never be the same! 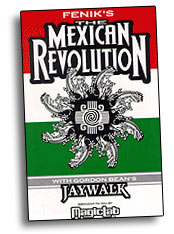