Gene Anderson is the single most influential performer that has perpetuated this miracle. A magical mystery that plays well in a stand-up or stage environment, even up close. You will enjoy watching his performance, as well as his explanation and you will do well to add his "signature effect" to your own performance repertoire.

Gene knows how to amuse an audience, from flopping intricate paper hats onto his head to shredding and miraculously restoring a torn newspaper. He knows how to keep his audience smiling. He is known throughout the world as the recognized master of newspaper magic. As Jay Marshall so often said: " Gene Anderson wrote the book on newspaper magic!"

This teach-in DVD is the fourth of the "teach-in" series spotlighting another magical classic and giving an in-depth view of this popular effect. 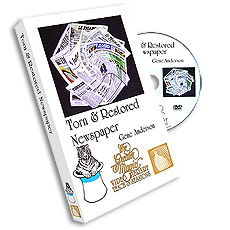