"The Linkage by Sean Fields, DVD"

We think the review regarding The Linkage by Mike Giusti of Hocus Pocus Magic tells the story best:

"I'm excited to announce that I have been chosen as one of the lucky few to preview Sean's newest offering to the magic community. It's called The Linkage, and it is Sean's approach to the Linking Card plot as originated by Paul Harris in his Cardboard Connection back in the 1970s.

"Sean was originally going to release this as a manuscript, but further talks and discussions revealed that releasing it as an inexpensive DVD would be the better route to take. And I'm glad he did.
"The effect is almost undoubtedly known to all: The centers of any two playing cards are torn out, thus creating a pair of impromptu card 'rings.' These cardboard rings are instantly and magically linked together! The two cards are actually seen to be connected through one another. The linked cards are then magically disconnected and are both immediately handed out for examination! Or, they are left in their linked state and given away as a souvenir!

"Sean teaches two different methods on this DVD, and they are extremely diabolical. If you are familiar with Sean's work on the Torn & Restored Card, you know how devious he can be when it comes to rethinking methods for existing effects.

"For the first method taught (the gimmicked method), the strongest impact will be not only when the cards link, but a strikingly visual and instant separation of the previously-linked cards. In fact, the slower you perform it the more impossible it looks! Without giving too much away, I actually went back and watched the separation over and over again.

"My favorite is the Bonus Linking Card, which almost didn't get on the DVD, but I'm happy Sean decided to release it! And DVD is the perfect medium for it as simply reading it on paper would not translate well at all! It simply must be seen and experienced. Only one card is used. It is essentially impromptu, and I believe that there is no stronger linking illusion with cards out there because the cards ARE linked at the end! They can even be handed out for examination or given away as souvenirs.

"I give this my wholehearted recommendation as I am a firm believer in strong, performance-tested, real world material. Sean has been using both these routines for years with great success. I'm going to add that this is not for everyone; it will require some work, a little patience, and some practice. Every good effect does. But if you are after 2 solid routines revolving around the Linking Card effect.
" 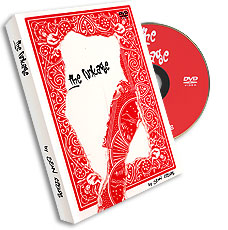