Did the magician Cazeneuve and the Queen of Madagascar have an affair?

Was there a ghost living in the house of the Fox Sisters? Did he pay his rent on time?

Why do magicians pull a rabbit out of a hat instead of a raccoon?

What magician invented the pay toilet?

This book, which also functions like a deck of cards, deals with the history of magic, but with an original focus. It does it through the caricatures and biographies of fifty two of the most important
magicians of all time.

It is a work filled with history, humor and adventure, but, above all, it is a book about magic and how to do magic. This deck-like book is so filled with magicians that it has ended up taking on magic powers.

With the book and a deck of cards you can guess what is written on any page that has been chosen at random by a spectator; the caricature of a magician selected by a playing card disappears; the page which a spectator chooses matches the only red card in a blue backed deck; a line of text appears rotated when a spectator turns over the corresponding card. This book will allow you to invent a multitude of new tricks.

This book contains more than one hundred magnificent caricatures drawn by Angel Idigoras, a magician and artist, along with the life, stories and miracles of each and every one of these celebrities. From the first prestidigitators to the most famous contemporary magicians: Houdini, Maskelyne, Hofzinser, Saint John Bosco, Dai Vernon, Slydini, Annemann, Cardini, Okito, Lavand, Tamariz, Ascanio and Copperfield.

The first deck-like book that is an illustrated history of magic. 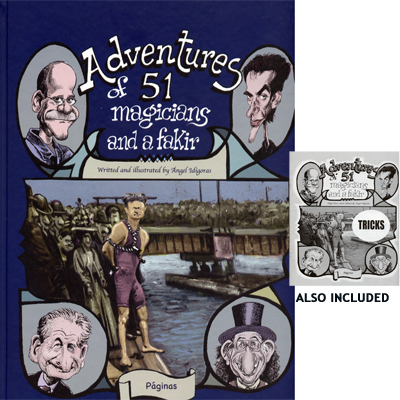