Martin A. Nash who performs as "The Charming Cheat" has long presented outstanding gambling themed shows that are both elegant and entertaining. This video was shot live at one of his lectures where he performed his entire show and then explained the routines. You will learn an entire card act that is designed to make you look like a card expert and make people say, "I would hate to play cards with you."

One of the strength of this DVD is the great patter and presentations Martin uses during his gambling routines. You will hear some excellent stories, jokes and gambling advice given throughout. Martin also gives advice on performing in addition to many technical subtleties and handling touches.

Poker Smoker:
You continuously shuffle the deck and let the spectator cut while you continually deal the aces to yourself.

Nash Multiple Shift Routine:
The four aces are lost in different parts of the deck. After one shuffle all the aces come to the top. They are once again shuffled into the deck and are now found at the bottom.

Pseudo Marked Deck Sequence:
The four aces are lost in the deck face-up. You then deal a round of poker dealing all the face-up aces to yourself using the Nash Multi-Center.

Ten To One:
The Ace through ten of Diamonds are lost in different parts of the deck and the deck is shuffled. A spectator selects a card and it too is lost in the deck. A second spectator names a number between 1-10. After a shuffle the top ten cards are dealt face up with the named number remaining face down. The selected card is the face down card and the missing card is found face up in the deck.

Daryl/Nash Trapped:
A card is selected and lost in the deck. The spectator takes half the deck and springs the cards unto the table. You then use your half of the deck as tweezers and use it to pluck the selected card from springing cards.

Jacks Or Better:
This is Martin's favorite routine and the one he uses when he has to impress. The 13-minute card routine, which is usually used to close his shows, is a multiphase routine where selected cards are continuously lost in the deck and are repeatedly found between the two face-up Jacks. Each phase becomes more impossible as the conditions become more difficult until the finale when a merely thought-of card appears between the two face-up Jacks. 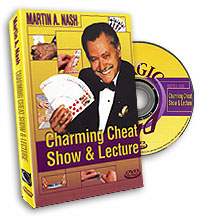