Zanadu's Sorcerer's Apprentice has been a kid's show favorite for years and now it's been updated with a very funny Harry Potter presentation, complete with Harry's glasses.

The performer brings a child up from the audience to be his Sorcerer's Apprentice. The child is outfitted with a tall wizard's hat and a pair of glasses which make him look very similar to Harry Potter.

Of course, a Sorcerer's Apprentice gets to help perform the magic. The child does his best to do a trick, but fails. No wonder, he didn't have his magic wand! The magician reaches into his helper's hat and pulls out a magic wand! The child tries waving the wand, but still no magic. The performer removes the hat from the child's head and has him wave the hat and wand together...still nothing, but the audience is now rolling with laughter! Why? It seems there was something left behind on the child's head...a rubber plunger that's sticking straight up!" 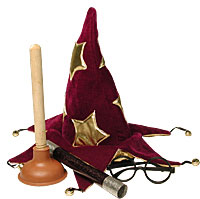