The $100 deck that was kept secret for four years!

In 1999, magic history was made. Less than 50 professional mentalists were invited to own a new special deck. For this honor, they paid $100! After the 50 decks were gone, many pros tried to get one of these wonderful decks, but were turned away. The secret to the stunning deck was to be kept exclusive for four years. Now, that time is up and you can own the same deck for much, much less! The deck is unlike anything ever before invented. The DVD is two hours long and shows over a half-dozen effects performed with the Cassandra Deck before a live audience. Even more tricks are explained in full with the help of professional entertainer David Alexander.

The Cassandra Deck has these important features:

Explanations of how to make and handle your own Cassandra Deck are thoroughly discussed so you'll be able to use this deck right away. Every nuance pertaining to handling your audience is covered.
" 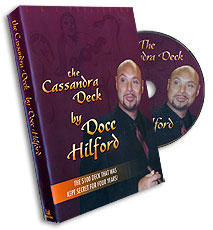