Sol Stone has remained an underground figure in the New York magic scene for more than 50 years. Although many of his routines have been published in various magazines and books, very few magicians have ever seen him perform.

Sol's magic is quick, direct and visual. His technique is superb and he has a "soft touch" which helps make everything he does seem very magical.This video features some of his favorite routines with coins, chips, pins, sponge balls, ropes, balls, and finger rings.

Includes performances and explanations to:

Many professionals have added these routines to their working repertoires--we are sure you will too. Hosted by Gerald Deutsch. Running time: Approximately 75 minutes. 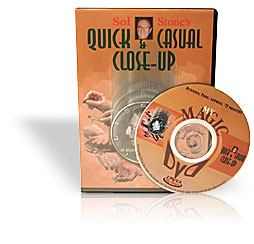