"I belong to a magician's society and we get together from time to time to talk about magic, have a drink, play cards and generally have some fun. Yes, we do play cards, but we play a special game called Magician's Poker. In Magician's Poker, not only are you permitted to cheat, but it's actually encouraged! You just can't get caught or you have to pay the pot. Now, magicians don't work with a full deck, so only 25 cards are used."With that, the magician displays a spread of 25 cards-the ace through ten of hearts and diamonds along with the Royal Flush cards in clubs. "You'll notice that there are no cards of value, except for this Royal Flush. "The object of the game is to get this Royal Flush hand for yourself. Now, I have witnessed many great games over the yeras, but I would like to show you the two most memorable. The first was played by a dapper gentleman from Canada. His game was a triumph of ingenuity and skill. He took the cards and shuffled them face up and face down, every which way." Illustrating the story, the performer mixes the cards together, face-up and face-down, then begins dealing five hands.

"And yet, when he dealt the cards they had all straightened out, except for the five he dealt himself, the Flush, of course!" "The most amazing hand I ever saw, however, was dealt by Jon 'Mac' McDonald, and although he was nicknamed 'One-Arm' McDonald, he was only missing a hand. He didn't even shuffle the cards, but simply gave the pack a single cut and began dealing. Well, all the players saw that the Royal Flush cards were evenly divided among them and started to play. Each discarded their single black card, knowing full well that as long as it was discarded, no one would get the flush."

"McDonald said in his low southern drawl, 'I believe, gentleman, that I take the pot' and slowly turns over his cards to show the Royal Flush! Well, the other players nearly broke their wrists grabbing for the discards, but it was too late and McDonald had beaten them in the most spectacular game of Magician's Poker I have ever seen."

Comes complete with all the necessary Bicycle cards and detailed instructions with notes on the Slop Shuffle, Zarrow Shuffle and additional handlings and ideas by Pete Brio, Bruce Cervon and Derek Dingle. 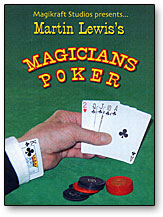