Milton Kort is a legend of sorts: a magician who has seldom traveled outside the Detroit area, who rarely performs at magicians' conventions or lectures, yet a man whom the professionals and greats in magic came to see; men like Paul Rosini, Stewart James, Dr. Daley, J. B. Bobo, Charlie Miller, Cardini, Dai Vernon and many more sought out Milt Kort and shared secrets with him.

But why? It was his great love of magic that drew magic's greats to him. Well, there was one other reason. Milt often fooled them with devilishly clever tricks of his own invention. These tricks are in great part what Kort is about. They all fall within the realm of close-up magic, Milt's main love, and they use such mundane items as playing cards, coins, dice, balls, razor blades, eggs, handkerchiefs, pens and toy elephants. What happens with those items, though, is anything but mundane.

Using skills and techniques mainly in the range of the average close-up enthusiast, Milt Kort offers 46 of his most baffling and entertaining tricks and routines to his fellow magicians, all based on one simple rule, Kort's First Principle: Have Fun! 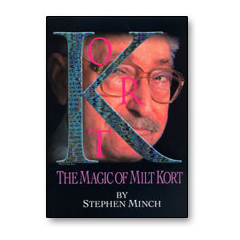