This is an impromptu routine, which is easy to do and uses absolutely no props. The magician asks a spectator to copy his actions. Both place their hands palm down on the table and begin turning them in a clockwise direction. The spectator turns his hand part way, while the magician turns his hand in a full circle! One and a half times!

This routine must be seen to be believed. On many occasions people have been so shocked that they actually screamed.

Includes everything you need to know and many of the latest innovations, which have never been tipped before. You will learn how to do three consecutive revolutions, cause sound effects, show your arm with twisted flesh, and much more. 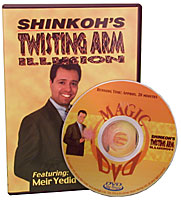