"Episode 1-The Father of Modern Magic
Jean Eugene Robert-Houdin the celebrated French conjurer and namesake of Houdini, has gone down in magic history as "The Father of Modern Magic." Beginning in 1845, Robert Houdin threw away the robes and conical caps of conjurers past and donned the now familiar magicians' evening clothes, bringing magic into the modern age. Part scientist and part wizard, Robert Houdin amazed his audiences, whether it be through suspending his young son in mid-air, exercising his "Second Sight", or demonstrating his mechanical automaton marvels "Antonio Diavolo: The Trapeze Artist" and "The Fantastic Orange Tree." This episode is the story of those glorious years in Paris. And a mission to Algeria in the service of his country to do magical battle with the warring Marabout priests.

Episode 3-The Herrmanns
The dashing and daring Herrmann brothers, Compars and Alexander, dominated the world conjuring scene for over thirty years-from early 1820's to the 1850's. Unlike many conjurers who usually remain local phenomena, the Herrmanns, with their now classic and universally imitated look, were wildly popular in all four corners of the earth. We also delve into the world of Adelaide Herrmann, Alexander's wife, now considered one of the great pioneer female conjurers.

Episode 4-The Greats of Modern Magic
A consideration of the great names of modern magic, where they started, how they achieved their rise to fame, as well as the influence they have had on other magicians. This episode covers Doug Henning revitalizing magic in the early 1970's, to Penn and Teller "the bad boys of magic," to Seigfried and Roy, the staple of Las Vegas.

Episode 5-Weird Magic
Strange and gruesome feats such as: fire eating sword swallowing, hammering a nail in your nose, eating glass, sticking a needle through your arm, summoning spirits of the dead. We explore the antics of "weird" specialists, bizarre magicians and sideshow performers.

Episode 6-Death by Magic
This is the sort of the bizarre and tragic accidents that can only have taken place in the world of magic. The primary focus is on the most dangerous illusion of all, the bullet catching trick, which has taken almost a dozen lives in the past century. This is an inside look at the effect these tragedies have had on the performance of dangerous illusions and, more importantly, why magicians still persist in performing them.

NOTE: Videos only available as a complete 6-volume series (sorry, PAL Format Not Available) and the DVD (containing all six episodes on one disc) is encoded only for viewing in Region 1-United States, Canada and U.S. Territories 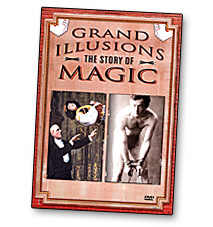