From Richard Sanders, creator of Fiber Optics, Slow Burn and VisiBill comes an exciting new DVD that will allow you to perform stunning magic with your own playing cards. Using an ordinary product that can be found in any art supply store, you now have the technology to CHANGE, VANISH and TRANSPOSE cards instantly!

4 Card Crunch: 2 jokers are placed face down in the spectator's hand and 2 jokers are held face up in your hand. You simply touch your jokers to theirs and all the cards change to any four of a kind! The perfect walk around trick. Carry it in your pocket and go!

Super Duper Jumping Gemini: A killer updated approach to Darwin Ortiz's classic effect. A packet trick with 7 quick effects that lead to a killer climax where all the cards visibly change to 4 jacks. Ends clean!

Color Killer: Watch as a blue backed deck of cards visibly changes into a red backed deck. You are clean to go into other card tricks. No palming!

Shooting Blanks: A blank deck of cards is shown. Showing 2 blank cards, they instantly and visibly, change to twothought of cards! In another instant the entire deck changes to a regular cards!

Transformer: After a series of eye-popping card changes, a packet of 4 cards changes to 4 of a kind that the spectator just named. Only 4 cards used. No deck work. Happens in the specator's hands.

Clearly Impossible: A prediction card is placed face down on the table. The spectator names any card. The deck of cards in the magicians hand is shown to be completely blank. The card on the table is turned over and IT IS THE NAMED CARD!

The Zing Kings: Four eights change into the four kings in the spectators hands. A killer 4 card trick which happens very slowly leaving the spectator freaked

Marked Triumph: A triumph routine where the deck rights itself except for the selected card. The selected card ends up with a bold marking on it's back and the entire deck has changed color. A killer, triple climax routine which allows you to roll right into other card tricks with the same deck. 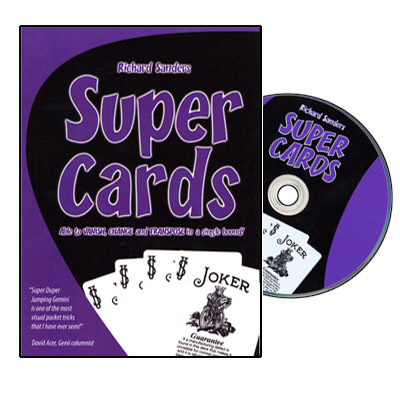