ULTRA BOARD?For the first time on video, see Richard Osterlind perform his classic Mental Epic type effect with an ungimmicked board!
SPOON BEND?A totally new bend with an ordinary spoon that looks impossible! This takes spoon bending to new heights!
FORK BEND?Three forks just melt over at the mentalist窶冱 command! It looks like power shoots from the mentalist窶冱 hands!
THE VERY MODERN MINDREADER?This is a whole act that uses nothing but a few cards and envelopes. This one can make your reputation as a mind reader!
DIGITAL FEEDBACK?This is the best calculator effect ever! You will stun your audience numerous times and leave them with an ending they will remember!

INSIDE THE FOLD?This is one of Richard窶冱 most cherished secrets! An audience member calls out a number. He is handed a folded card which has been in the performer窶冱 empty hands from the beginning. The chosen number is predicted inside. It is that clean!
STAINLESS STEEL BLINDFOLD?This is one of the classics of mentalism. See Richard perform his favorite routine right out of the manual!
PENOMENALLY (PSYCHIC CONTROL)?A pen placed on a bottle moves at the mentalist窶冱 command! There are no threads and the movement is totally under the performer窶冱 control!

STOPPING A WATCH?The actual mechanics of stopping watches and changing the times are demonstrated. Richard discusses the applications to many types of watches. Also included is controlling a compass and how to mentally destroy a hotel room key! 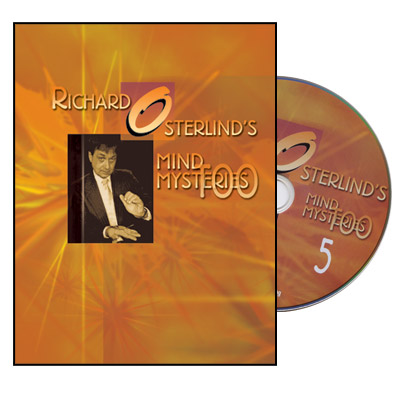