Volume 6 features many of the sleights and routines that have made Lennart world famous. Among the many highights are Lennart's seminar techniques for the Later at Palm/Steal, including the Snap and Laser Deals, the Drop Cutt and the Angle Separation. This volume compresses a lifetime of pasionate card magic onto a single DVD. It truly is the quintessential Lennart Green! Also included is a bonus item, Xirtam, which must be seen to be believed. 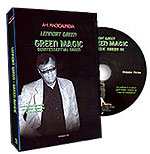