An insanely dynamic entertainer and innovator, Patrik Kuffs has made smash-hit appearances at the Just For Laughs Festival in Montreal, the International Battle of Magicians in Atlanta, and on such varied television shows as Popular Mechanics For Kids, Ad Lib and Urban Magic, with David Acer and Richard Sanders. This book, his first, contains seven eye-popping showpieces for stage and close-up, each one ingenious, engaging and astonishing enough to steal a show!

And so much more! Seven By Patrik Kuffs is an inspired collection of close-up, stage and mental miracles, rich in their simplicity, remarkable in their effect! Written by David Acer, illustrated by Joey Incollingo. Number Two in the critically acclaimed Seven By Series. 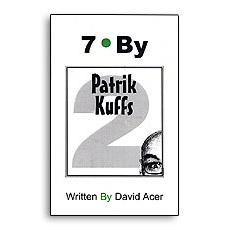