The magician deals the four aces face down onto the table and three indifferent cards are dealt onto each ace. The Ace of Spades packet is picked up and the cards are spread showing the Ace and three other cards before all four are slipped into the card case which was previously examined. The other three Aces then magically transpose with the indifferent cards and, in the end, the four aces are found to be inside the card box! 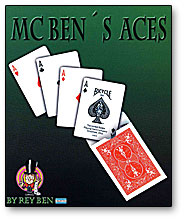